This month was LOOOOONG. Usually January is the worst month, but goodness, this February was rough. The weather was absolutely insane and we had so many random things go wrong and need repaired. Our house is ALMOST DONE…which is why I think time went especially slow because we are so anxious to move in! But we made it to March and we couldn’t be more excited! Here is a rundown of our incredibly long February…

We always try to do several fun activities to celebrate Valentine’s Day for the kids…starting with making valentines for their classes. My crafty girl always wants to make her valentines, rather than just buying some and putting her name on them. This year, she made “love monsters” for her class. And Brax of course, wanted dinosaur valentines! They enjoyed putting them together for their friends. 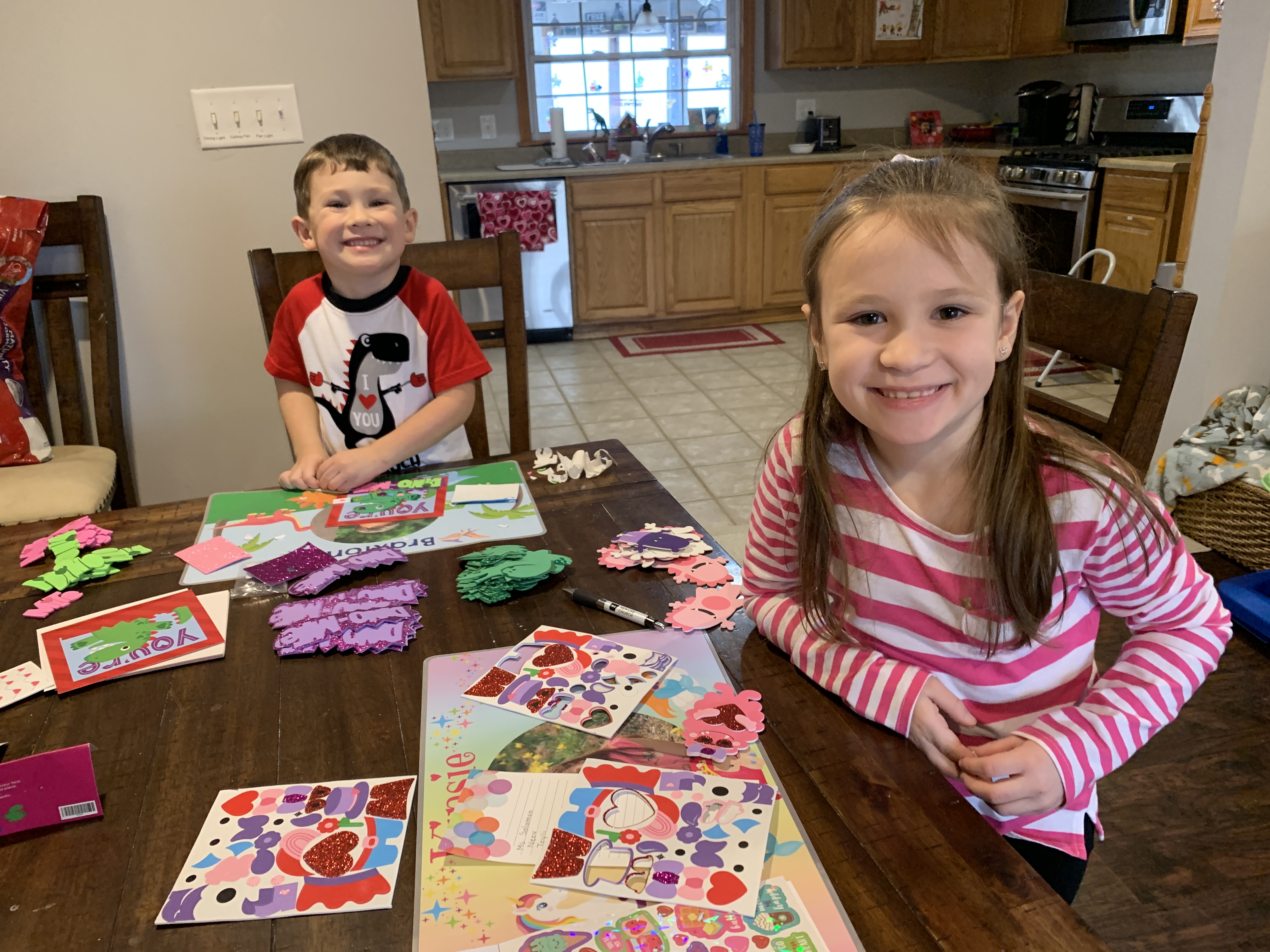 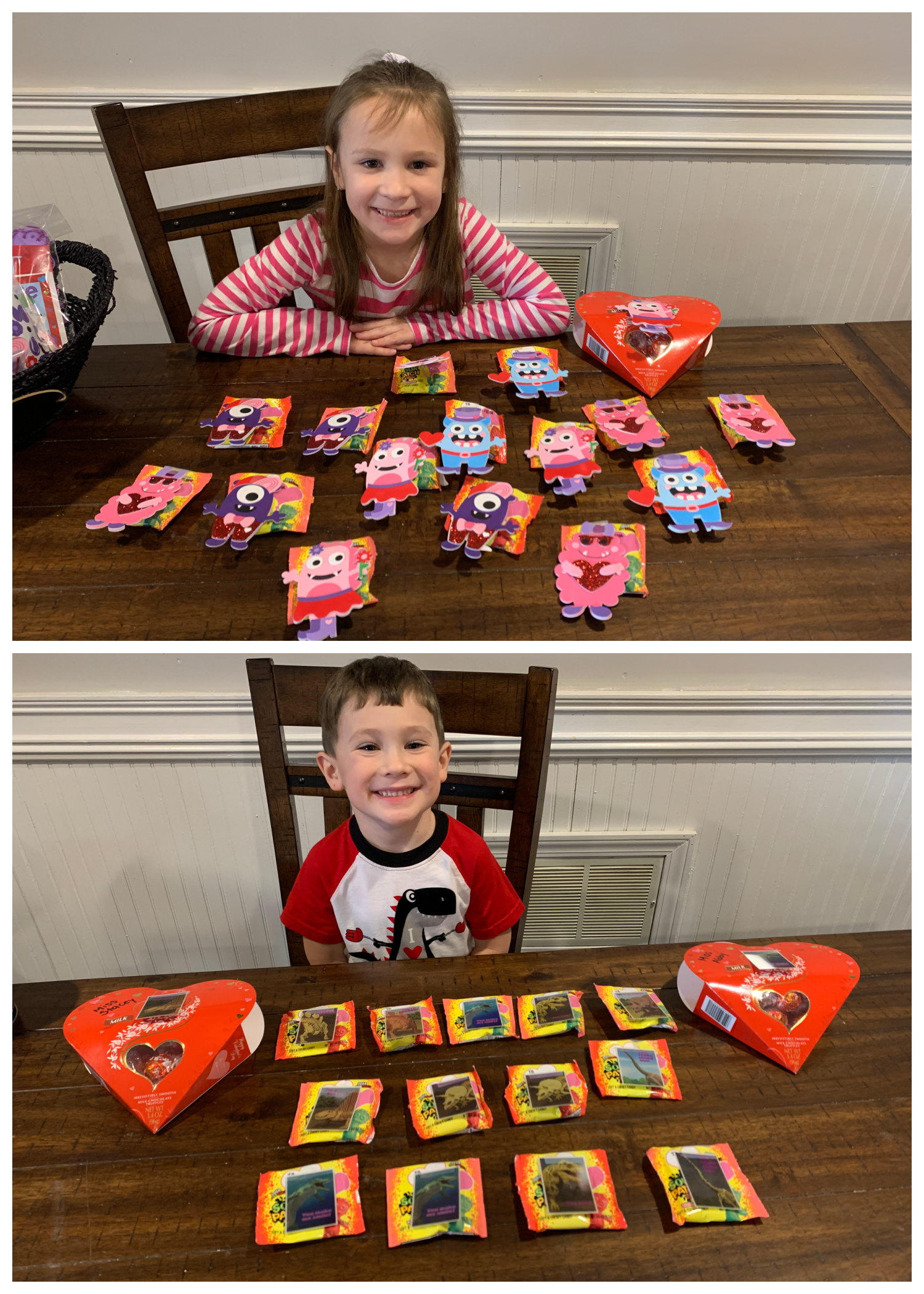 We also spent a day making valentine cookies (we threw in some unicorns too). The kids always love making cookies, and their most recent favorite decorating themes include Harry Potter cookies (notice several of the cookies have glasses), and cookies with masks! 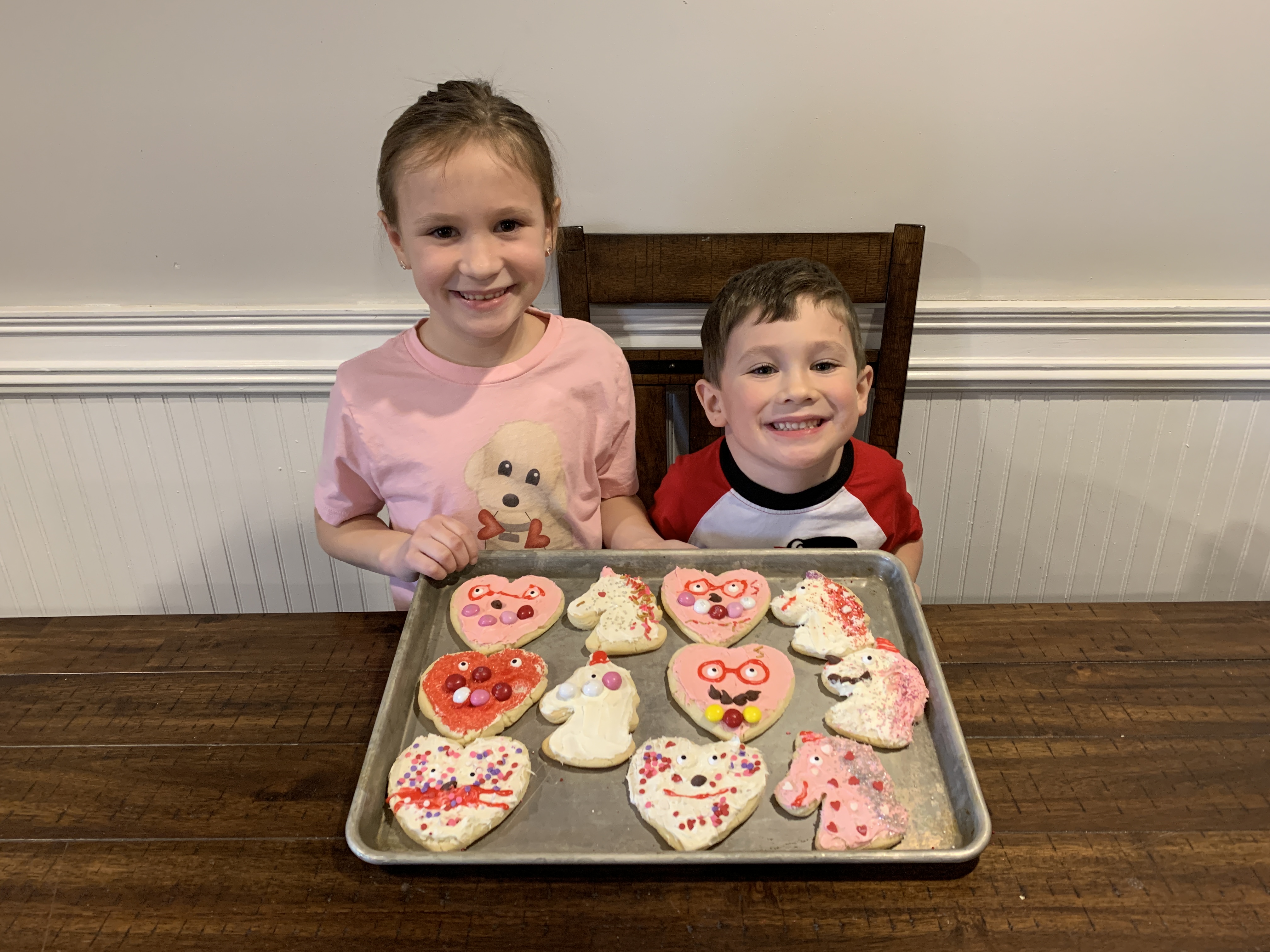 On actual Valentine’s Day, Ryan had to work in the afternoon so we did our valentines activities in the morning. This mainly included a scavenger hunt to find their gifts. Then of course I always take a million pictures of them…especially since its Brody’s first Valentine’s Day! 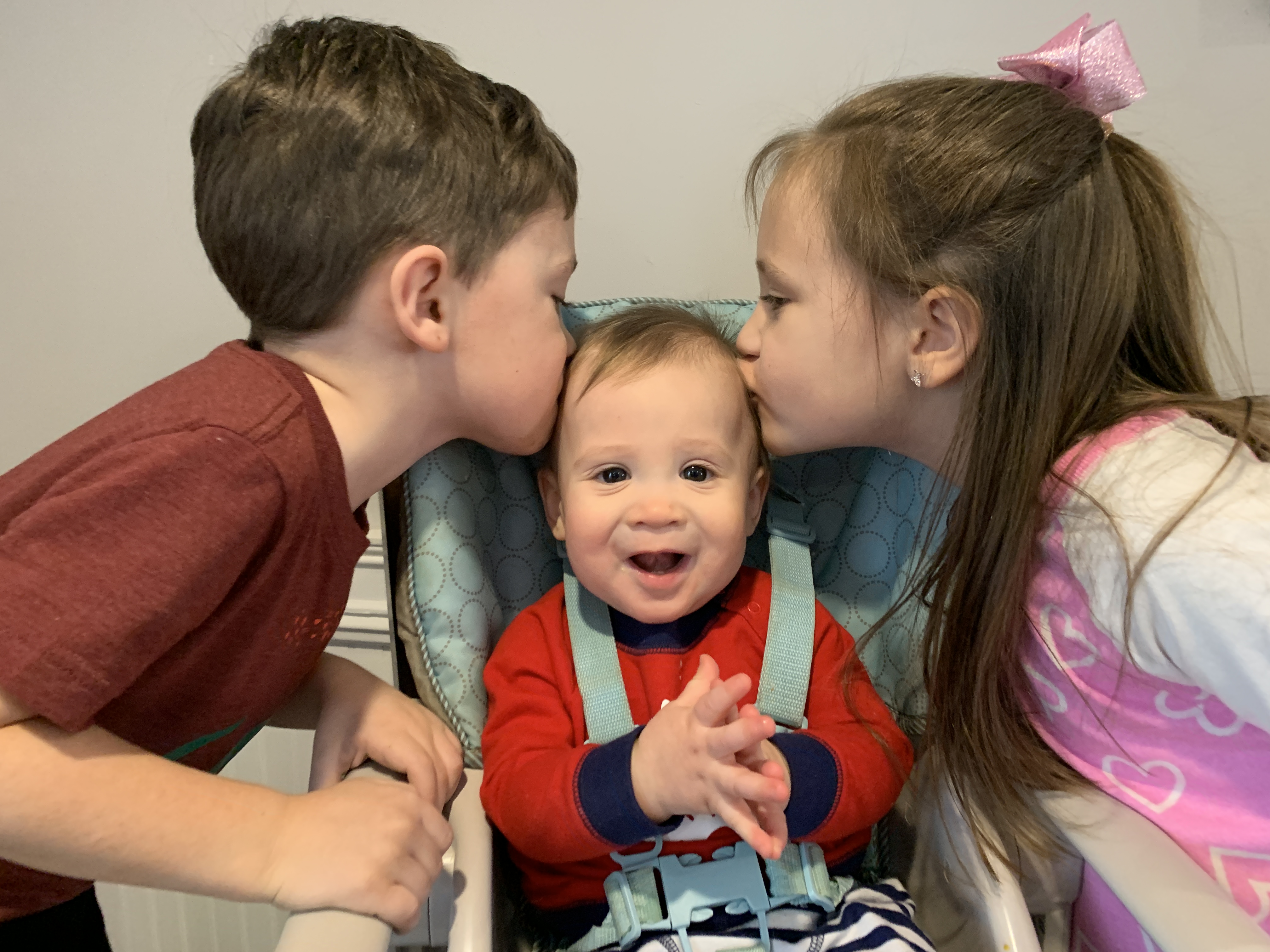 A recent tradition I’ve done the last few years is writing reasons why we love the kids – one reason for each kid starting on February 1 until February 14. They loved waking up each morning to see a new reason, and Brody loved wrinkling up and chewing on his reasons!

I also usually try to make a Valentine-themed dinner for the kids. This year included heart-shaped grilled cheese sandwiches. And for Brody, his lunch meat and veggies were arranged in a heart!

The week after Valentine’s Day was INSANE. Not only the entire state of Indiana had major snow storms, but even southern states like Texas and our old home state of Arkansas did too! The entire time we lived there, there was maybe a light dusting of snow once…and the entire city shut down. Now they had like 10 inches! I’m not sure how they survived! Anyway, the kids didn’t have school on Monday (President’s Day), and that is when the madness began. It snowed ALL DAY and ALL NIGHT. And then it snowed MORE. And MORE. It just wouldn’t stop. The kids ended up having 3 snow days in a row! (Kinsie had e-learning on these days). And it wasn’t ideal to go outside and play in the snow because a) the temperature was in the single digits, and b) Ryan was working the whole week and it was hard managing time around Brody’s naps and Kinsie’s schoolwork…but the kids didn’t even want to play outside. They were over it! We all were…except for maybe Koda.

We did have some epic icicles on our house!

Koda enjoyed the snow! The rest of us not so much. 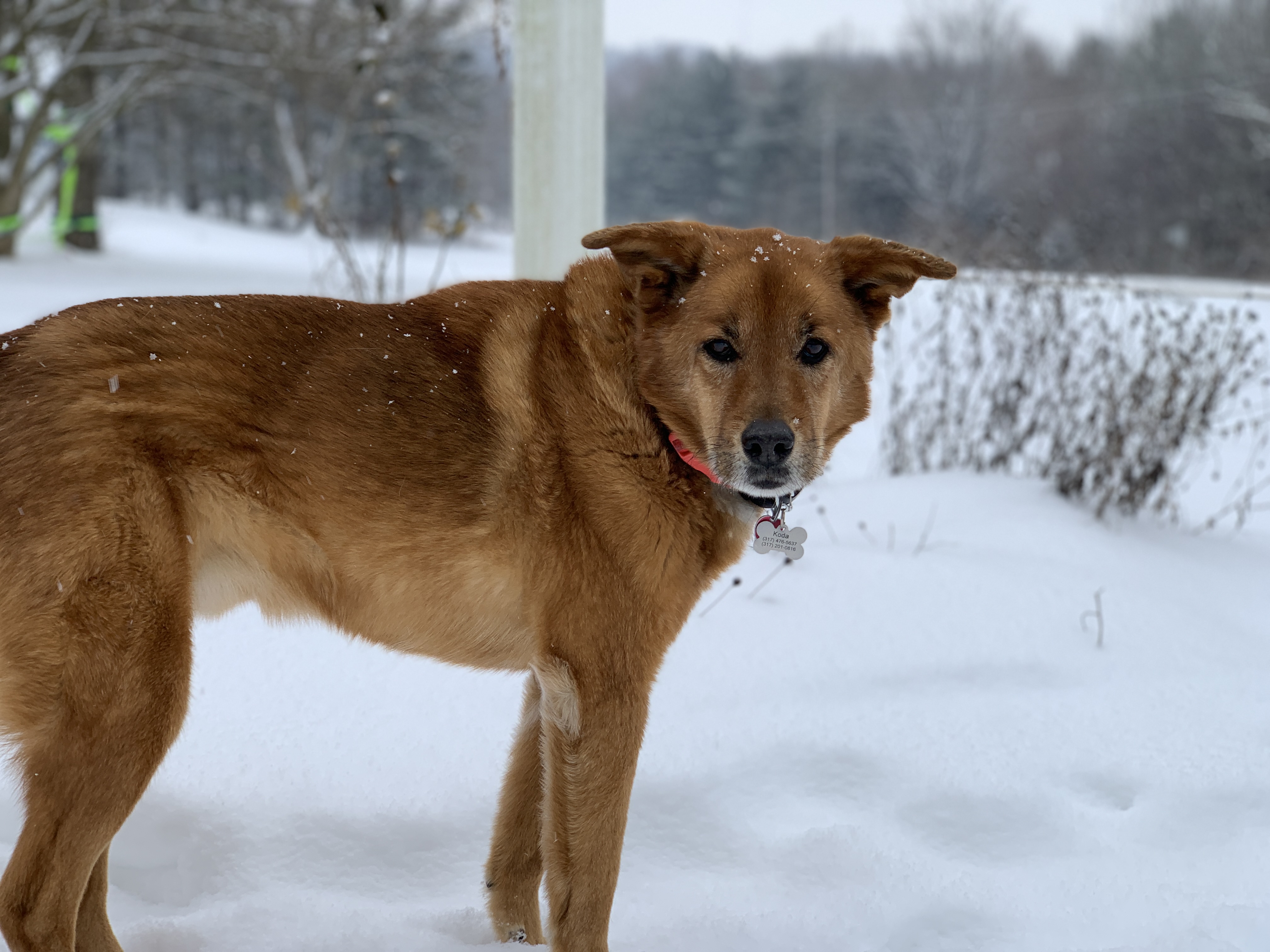 Kinsie all bundled up doing her school work online 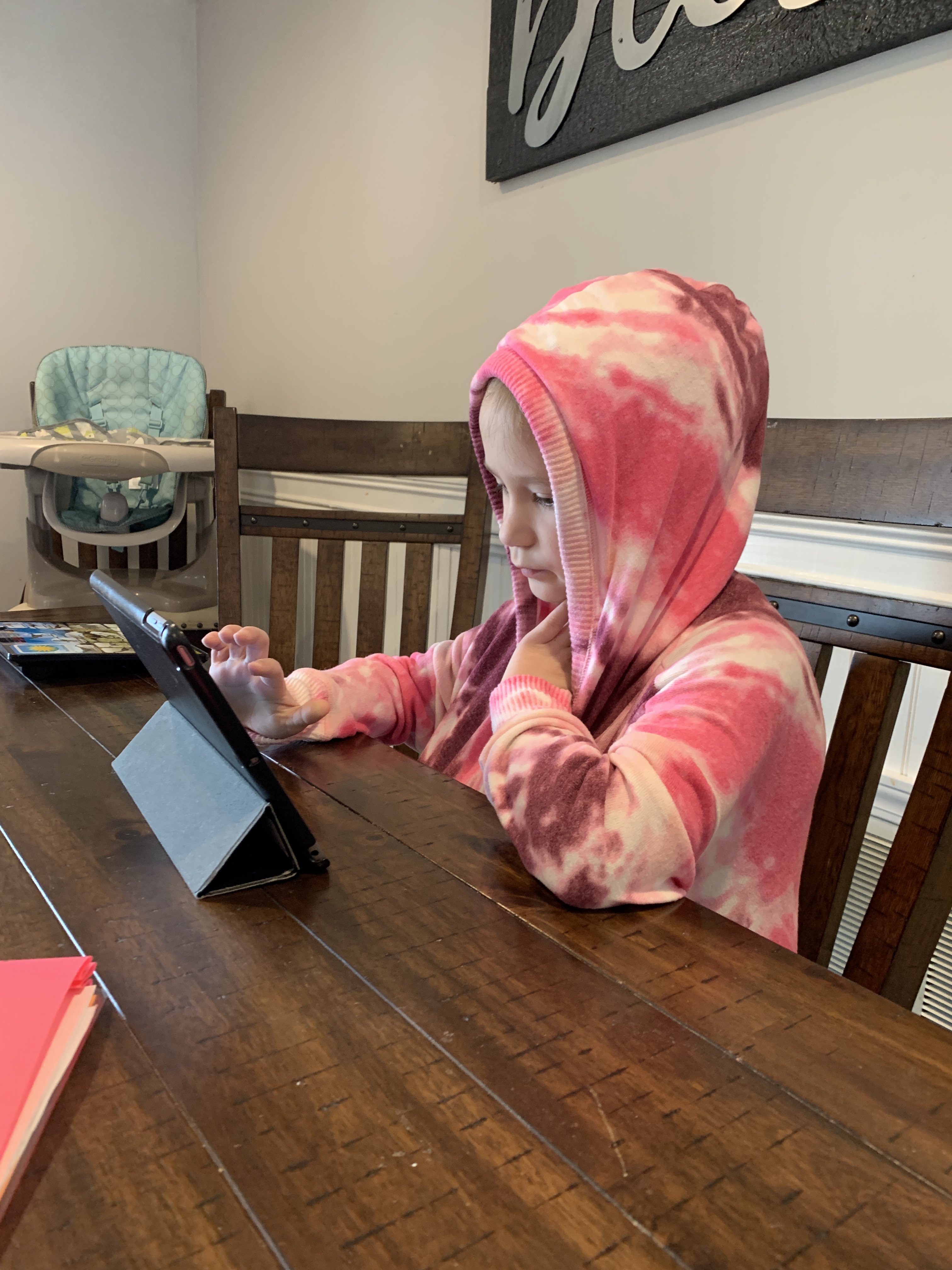 At one point, I did scoop up some fresh, clean snow and the kids and I made snow ice cream!

Not only was the weather crummy, but about everything broke down during this week for us. Our toilet stopped working (and we only have one bathroom in our rental), my car got stuck in the deep snow in our driveway, our laptop stopped working intermittently, our printer stopped working, and once we actually got my car out of the driveway, the power steering pump needed replaced! It was a tough week. We were stuck inside all day, every day for a week. We actually ended up spending one night at my parents house just to have a working toilet for 24 hours. The kids were sick of each other and sick of not being able to go to school. And we were all sick of everything not working…but we got through it, and we know it could have been much worse, so we tried our best to stay positive!

Like every other month, February consisted of a lot of staying home and trying to stay busy. There is always a lot of arts and crafts, science, games, and imaginative play.

One day when Aunt Renata came to visit, she got out some of Ryan’s butcher paper and started creating a board game with Brax. They included Dinosaur Land, Unicorn Island, and more. Once Kinsie came home from school, then she took off with lots of ideas for the game too. The kids loved designing it and playing it!

Ryan and I recently watched the Netflix show called “The Queen’s Gambit.” It’s about a young orphan who becomes a prodigy and world champion at chess. I’ve never known how to play chess, and watching this show made me want to learn. Ryan bought a learning version of the game, called “No Stress Chess.” So one day, Ryan started teaching me how to play, and the kids became obsessed…especially Brax! I didn’t think it would interest him much, but he LOVES it, and still asks Ryan to play with him regularly!

Kinsie is still slowly working through all of the science kits she received for Christmas. Ryan loves doing them with her and teaching her about science along the way. Brax usually joins in on the fun too! 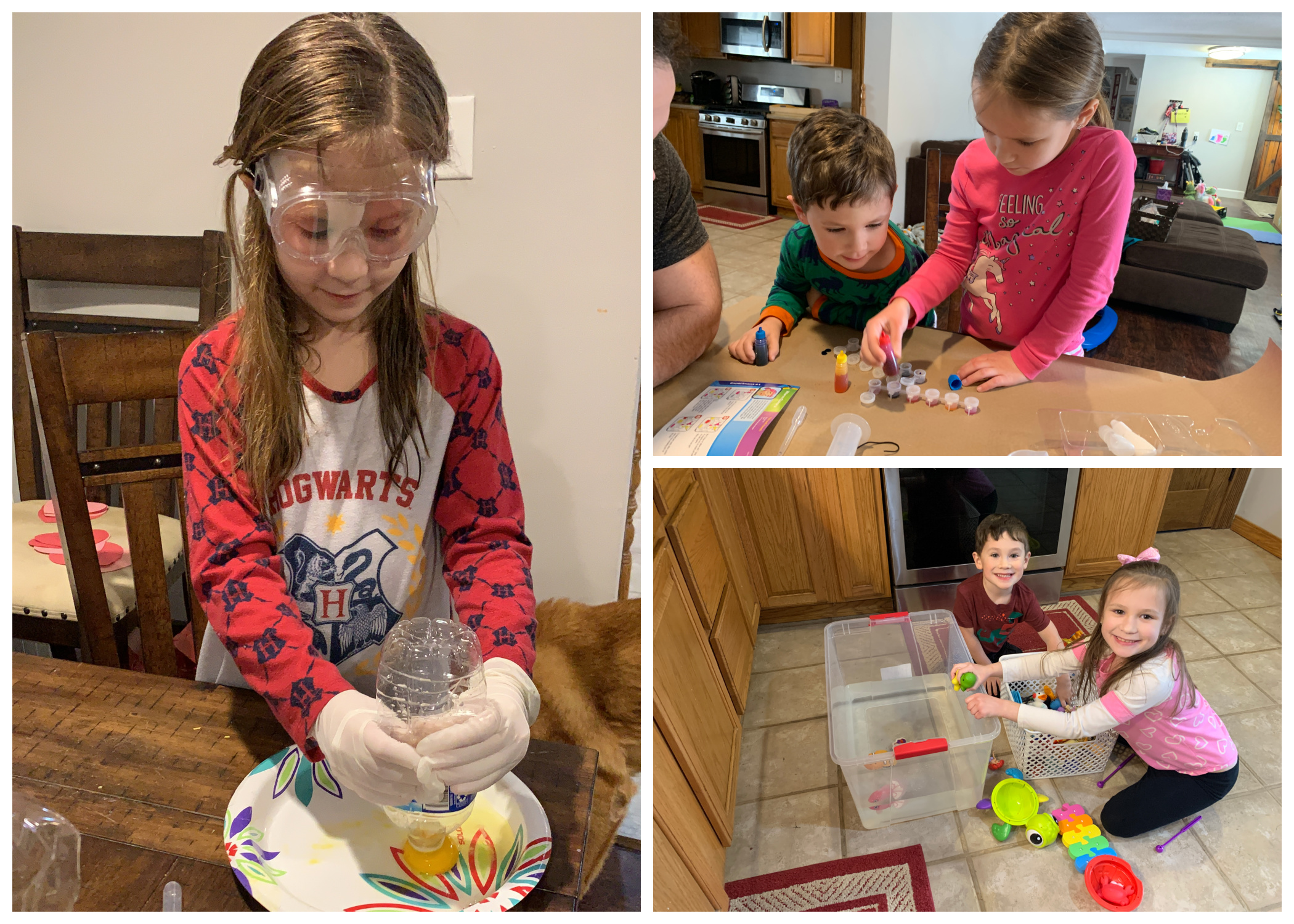 One day, Kinsie randomly decided she was going to make vet stations for their stuffed animals. She had a station for checking eye sight and getting glasses, a teeth brushing station, a station to check for ticks, and a station to receive a shot and decorate a bandaid to put on after the shot. She asked Brax and Brody to each pick a stuffed animal to go through the stations with. It was so creative! 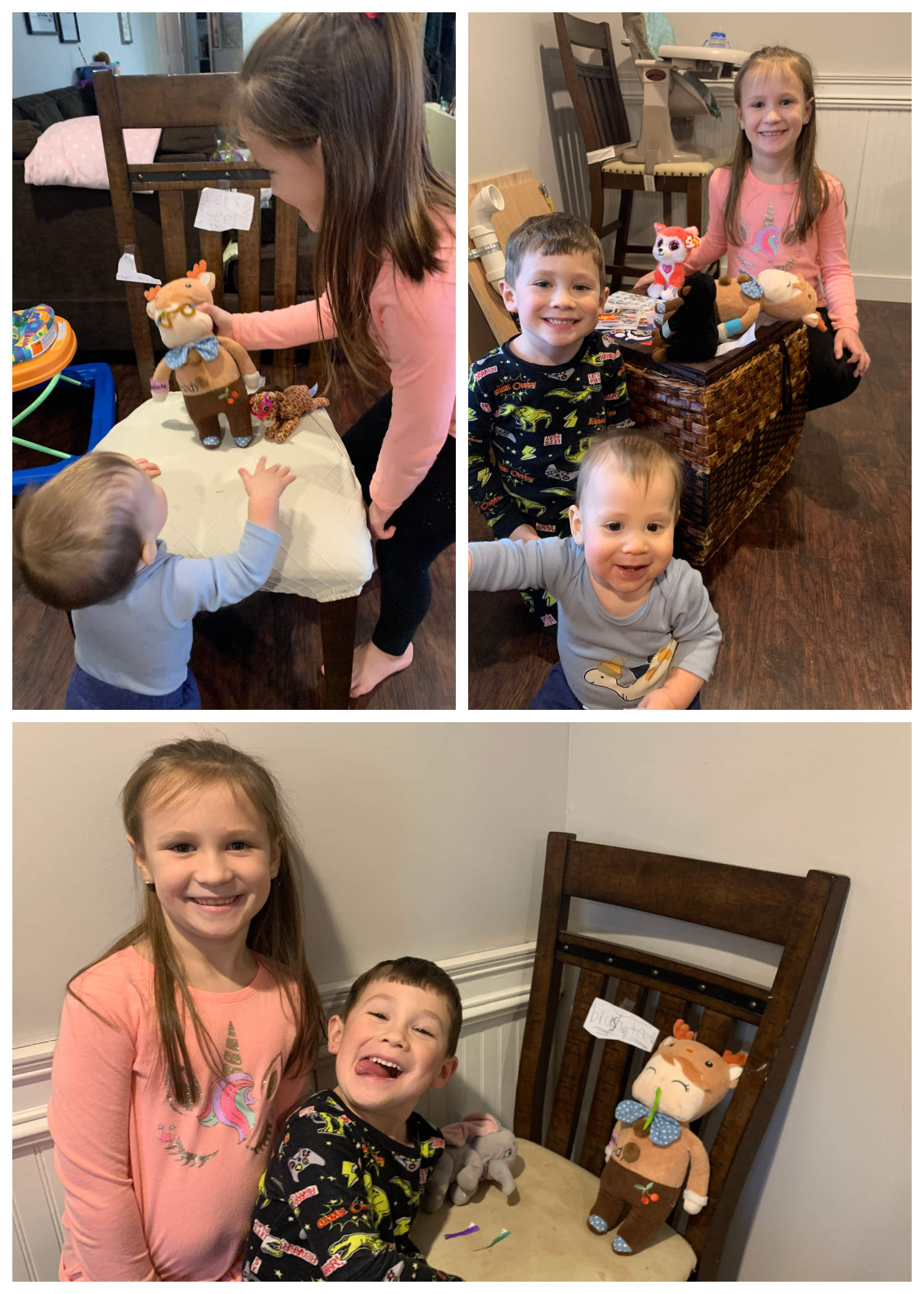 I have always wanted to collect all of the kids’ drawings and artwork and put them into a book, but I never took the time to do it. Well one day, my sister-in-law sent me a text saying that Shutterfly was having a deal where you could make a book with free unlimited pages. I knew right then, this was the time I finally needed to do it. So I spent the next couple of days organizing the kids’ artwork, scanning it all, and arranging it all into books. I made one book for Brax with artwork from age 2 until now, and I had to make 2 books for Kinsie because she had SO much artwork. Just last spring alone when the pandemic hit, drawing was stress relief for her, so she spent hours a day drawing. Now all of that artwork is displayed in these awesome books rather than tucked away in bins where nobody will see them. I love how they turned out! 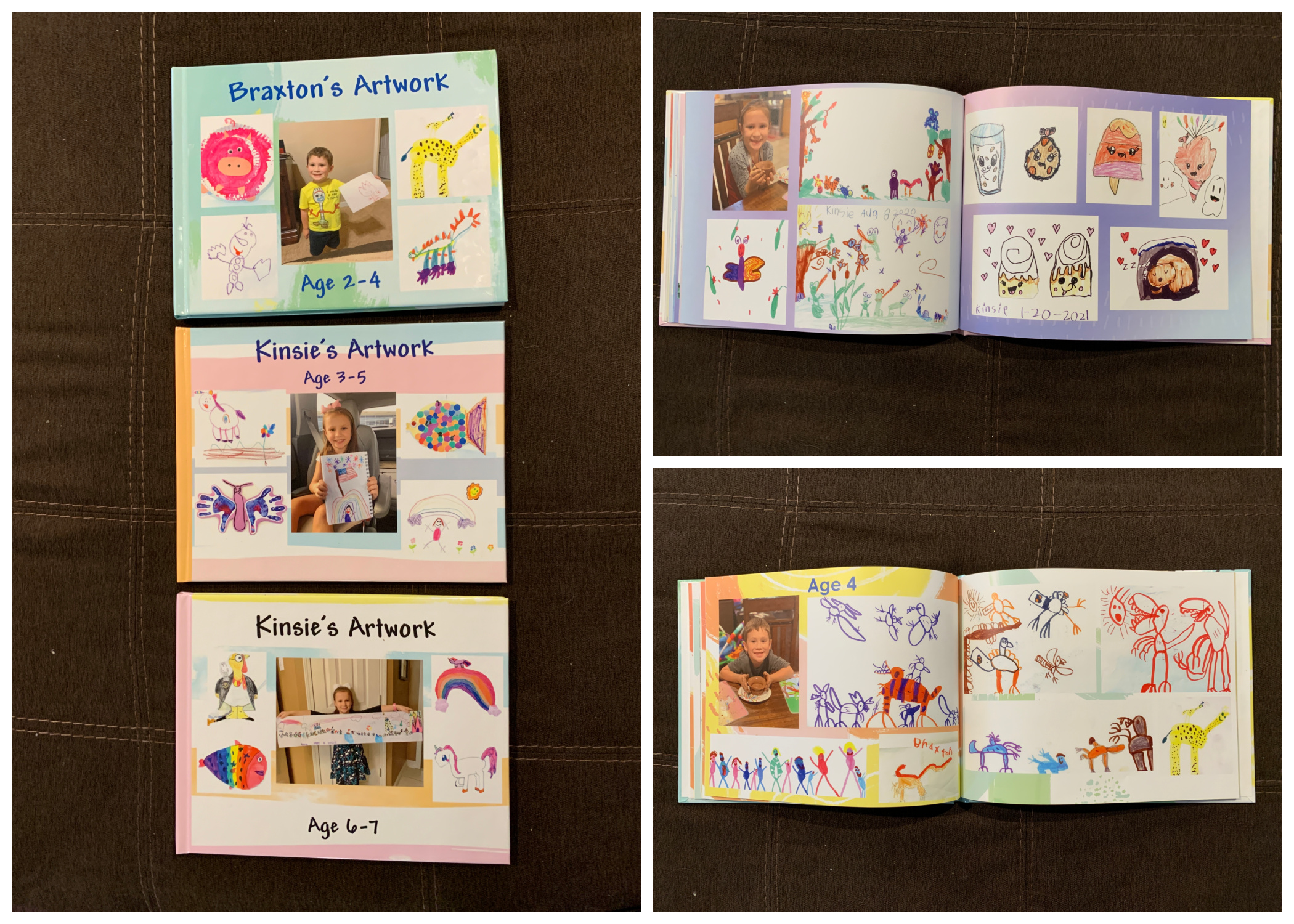 Since we hardly ever leave the house, Brody often gets bored with his same environment and toys, so I try to switch it up and take him into different rooms. Whenever I have computer work to do, I bring him to the office (which is also the room where he sleeps) and I put him in his pack n play and put toys in with him. The kids always like to get in there with him to play, so of course I had to document it!

Even though this year is very different, the kids are still really enjoying school. I love seeing the different activities and work they bring home from school.

This particular paper Kinsie brought home melted me. She had to write about her superhero, and she wrote about her dad! 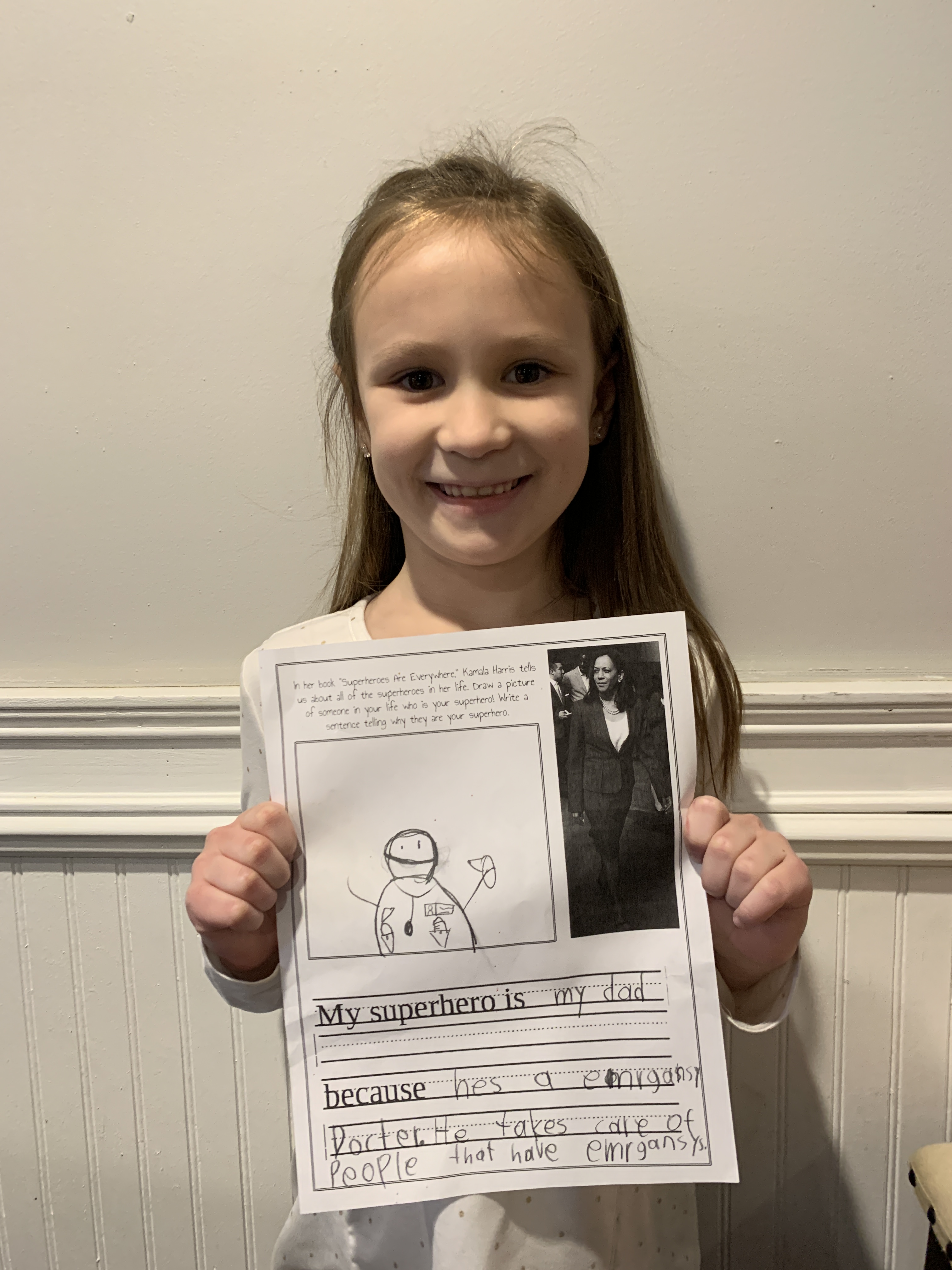 I love when their schools share photos on social media so I can get a glimpse of their day! 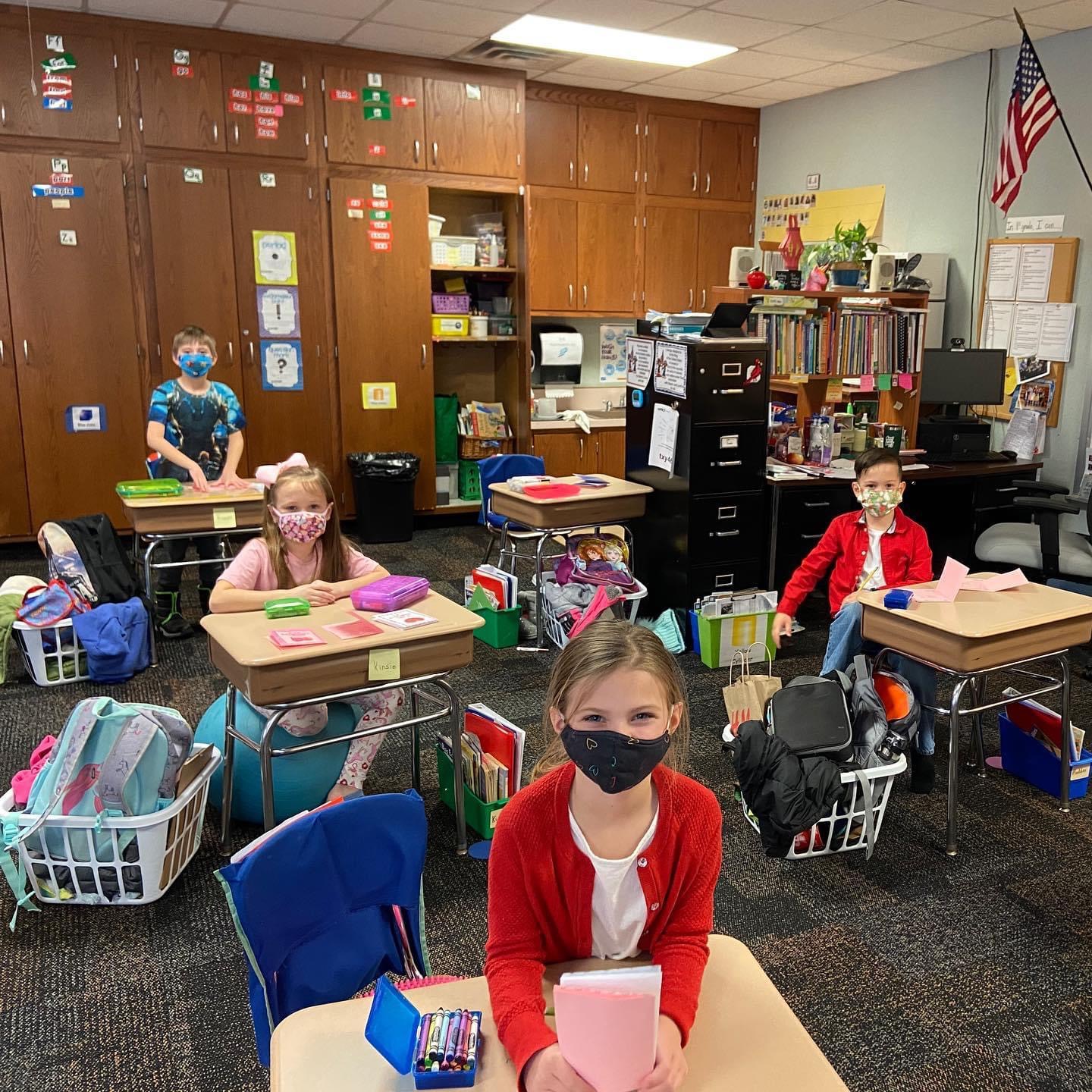 My parents invited all the cousins (except Brody…he still needs his mama at night!) for a sleepover. It’s reasons like this why, even in the midst of a horrible winter, we are so glad we moved back home! 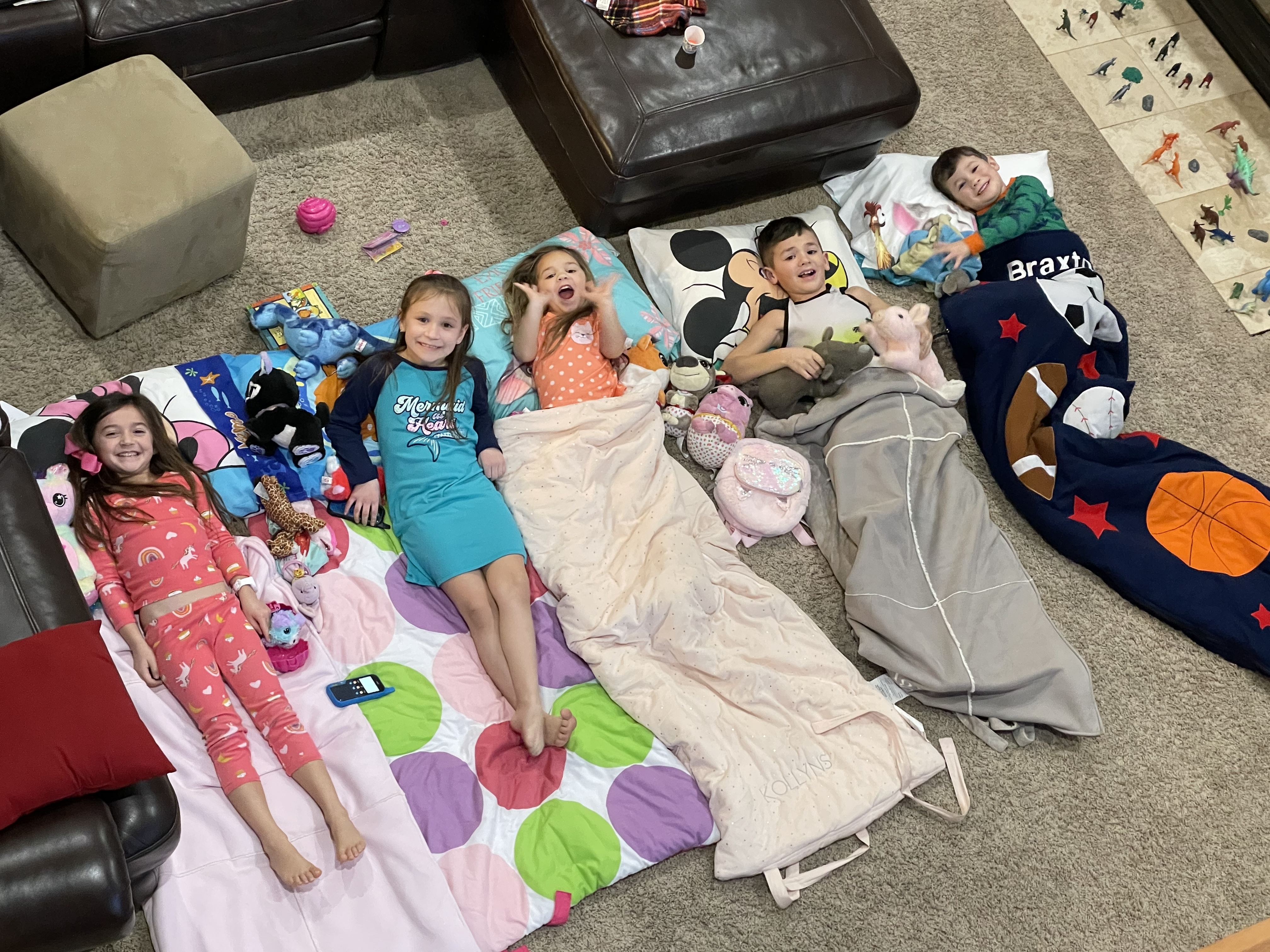 After the snowstorm week from hell, the sun finally decided to shine again! The temps got up to the mid fifties and it was HEAVEN. Most of the snow melted, and we finally ventured outside and I can’t even tell you how amazing it felt to feel the sun again!

Progress on the House

Our house is ALMOST DONE. I’m so excited I can barely think straight. The updates this month were SO fun because we’ve gotten to see it slowly come together to look like the final product. It is so beautiful I could cry.

The living room after a fresh coat of paint

In love with my counter tops! 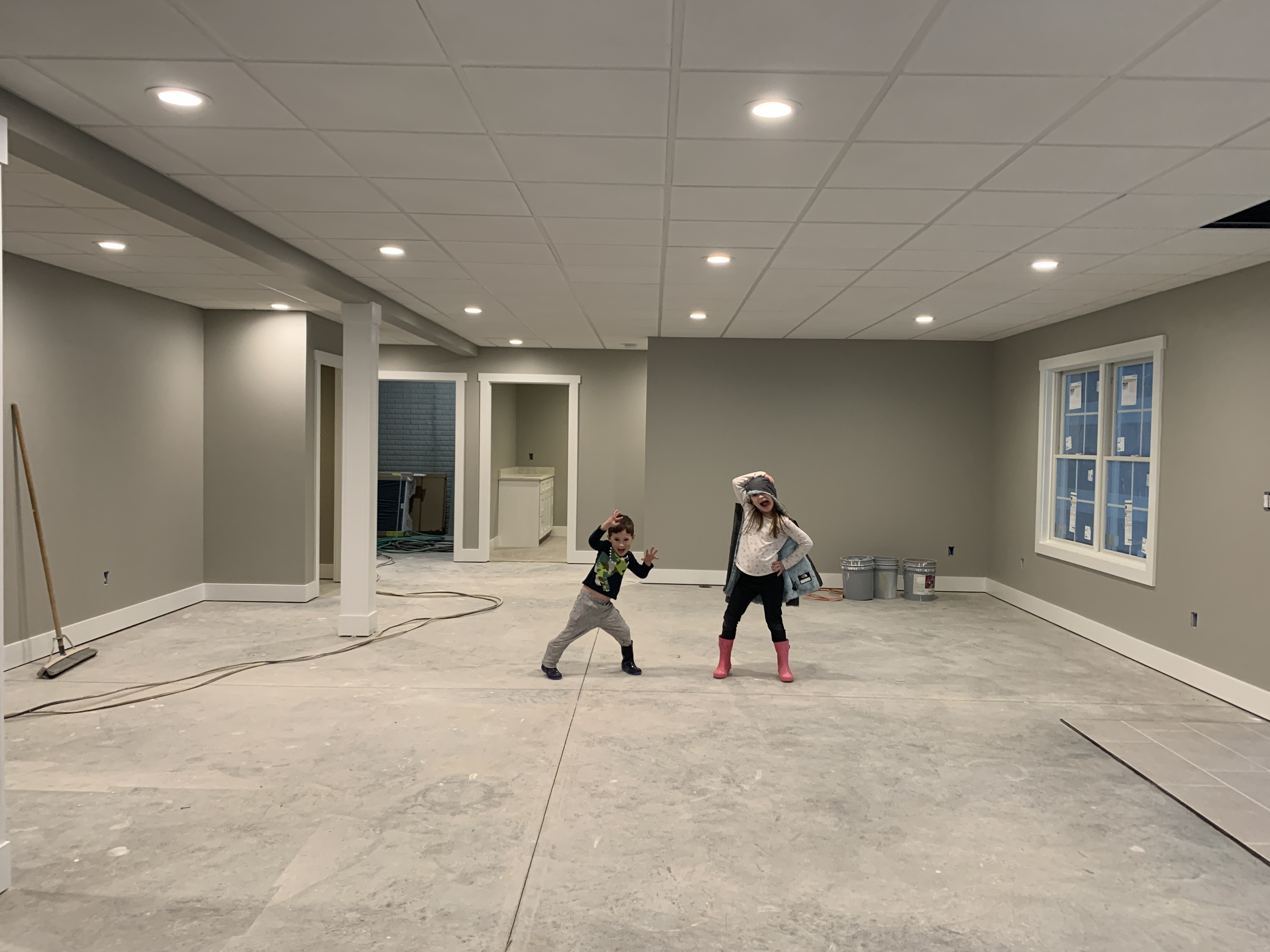 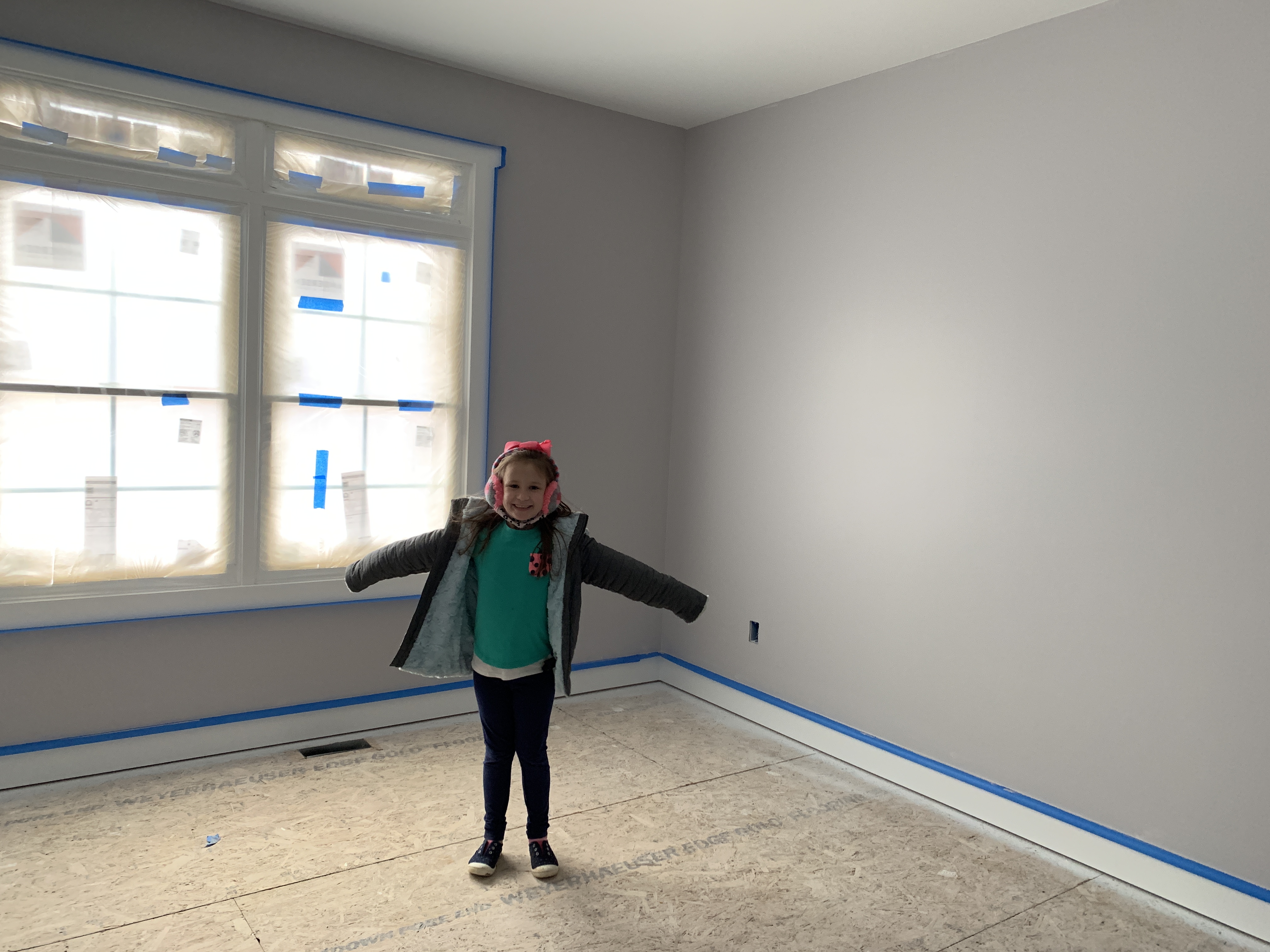 The upper back porch 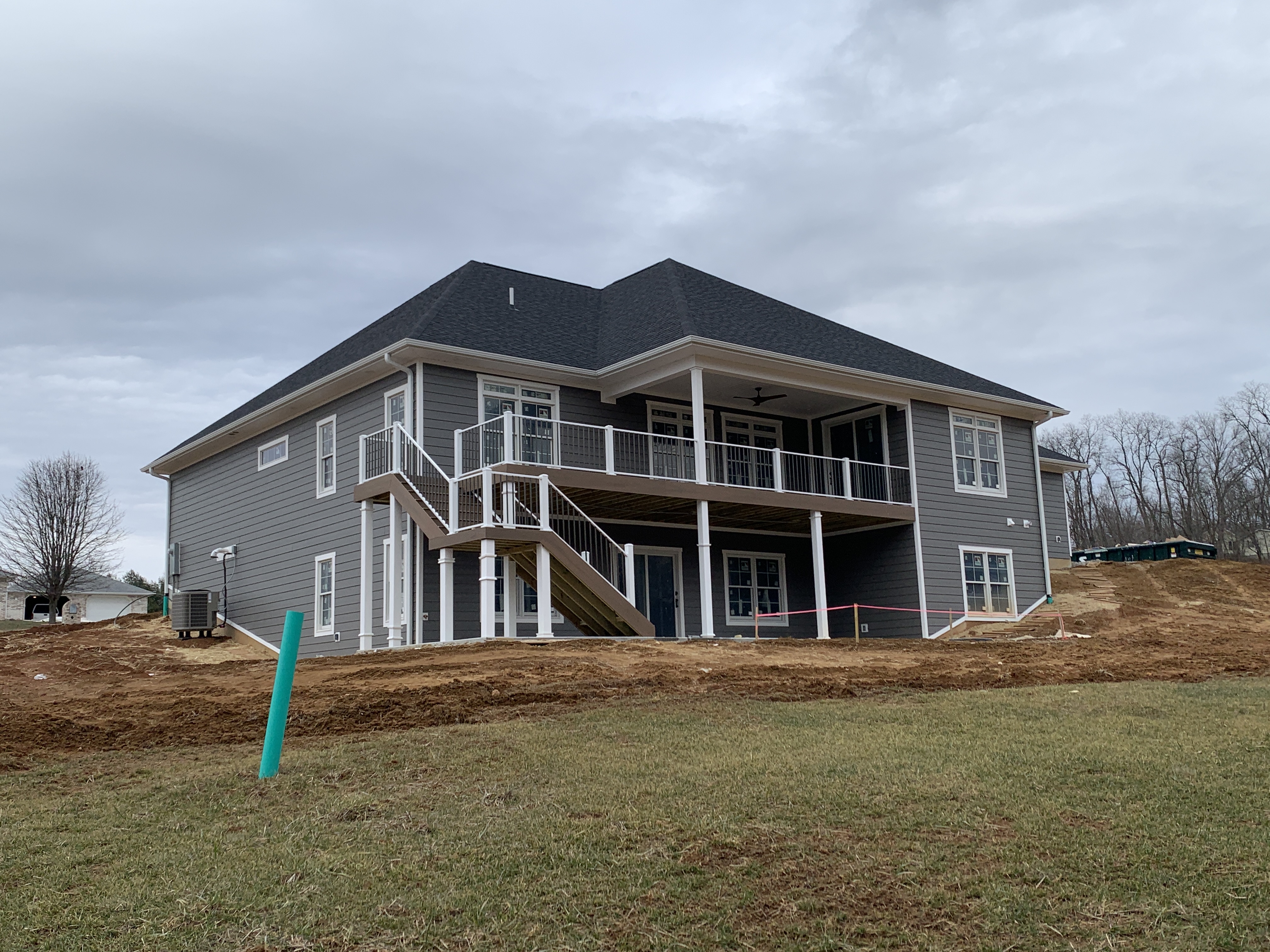 Ryan and I have had to meet with the guys working on the house every once in a while to discuss things, and Brody is usually along for the ride. One day, we had to go through the house and decide the layout of all the closets. Well I guess we took longer than I expected because Brody ended up falling asleep!

Picnics are a common thing at the house!

My baby is only 3 months away from turning one, and I’m not ok with it! Goodness this boy brings us so much joy. He is so sweet, silly, and happy, and he still LOVES his mama. The feeling is mutual, but I don’t necessarily feel the need to hang all over him and chase him around like he does to me. 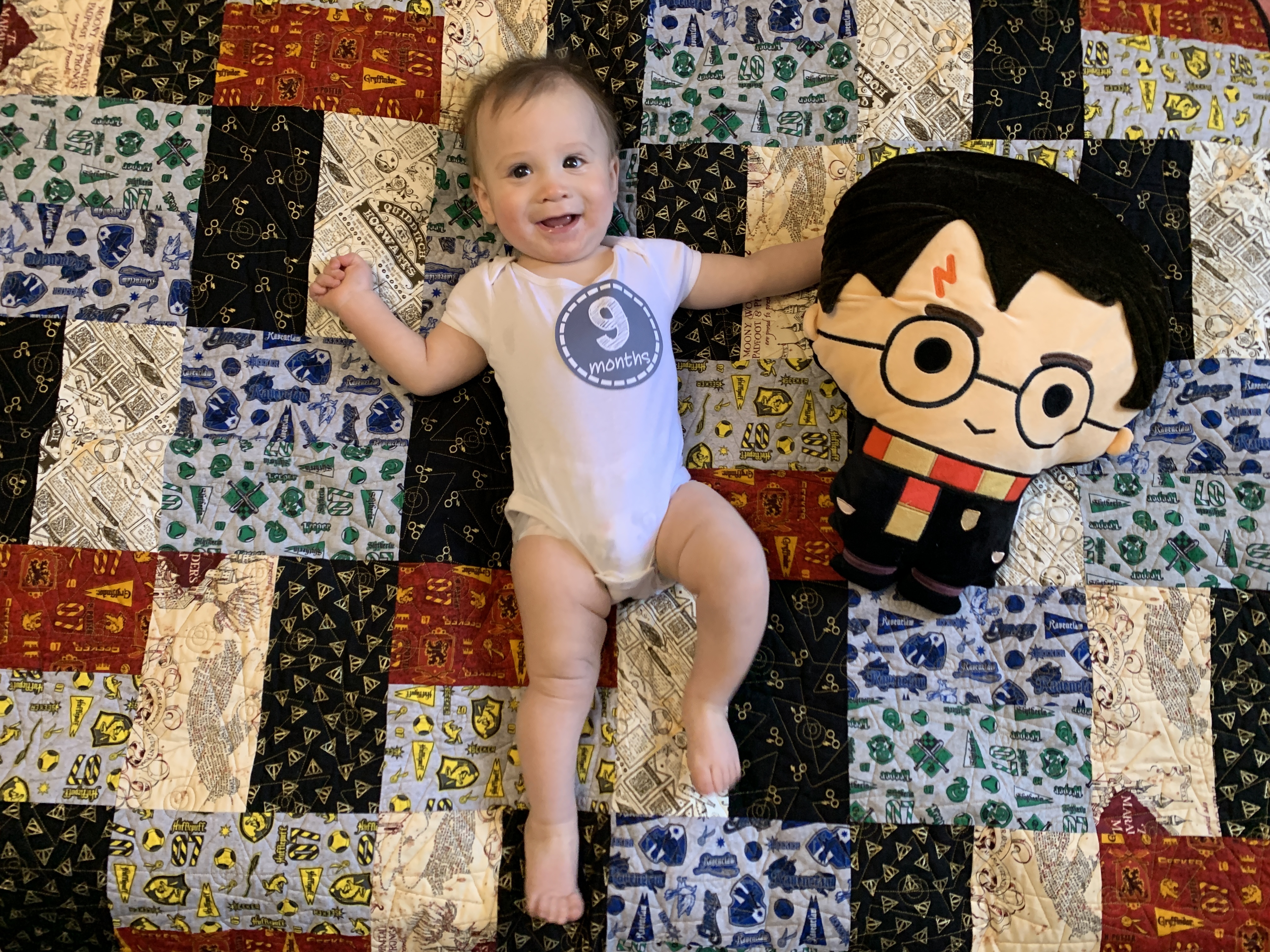 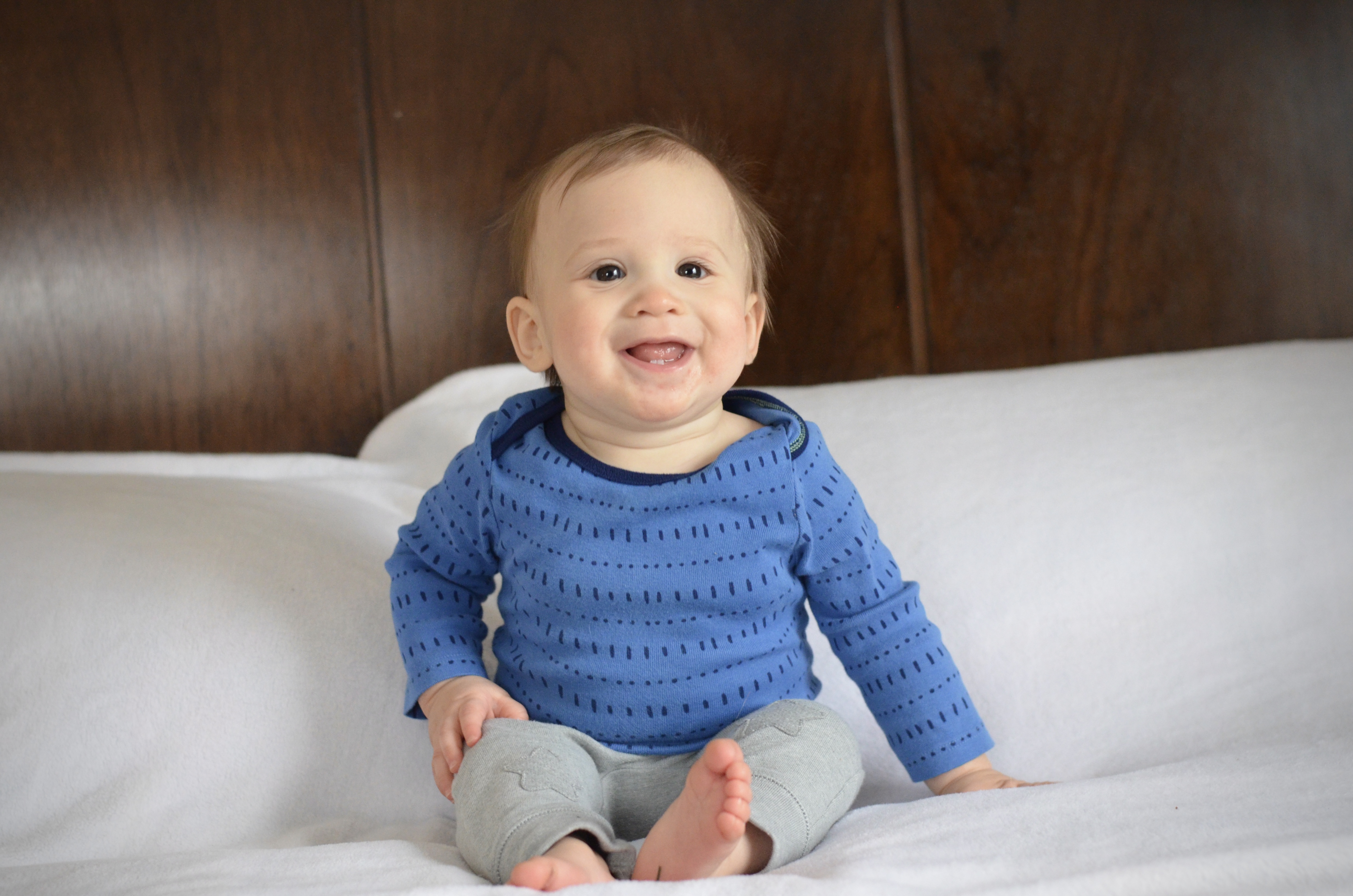 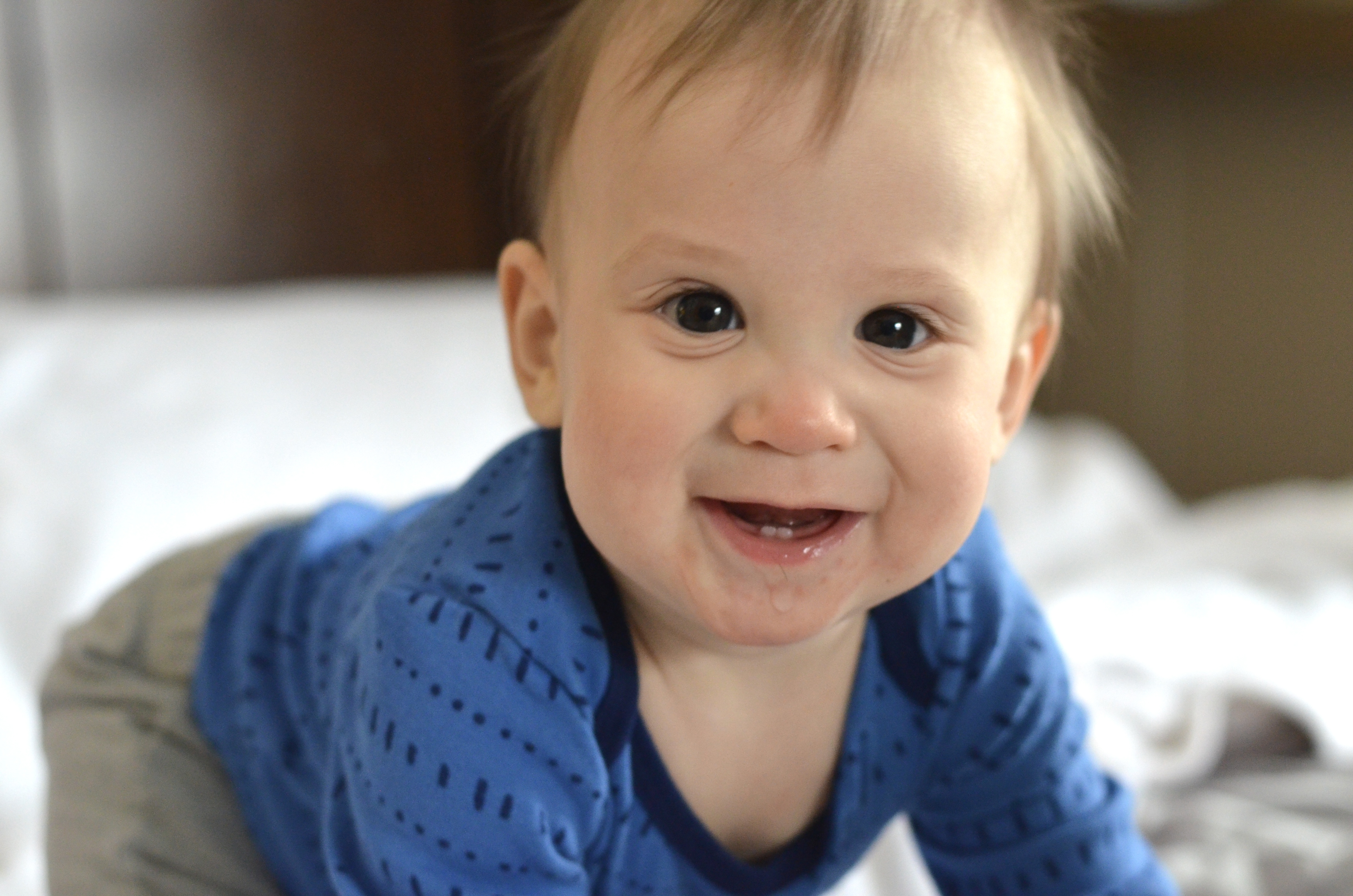 On Brody’s 9 month birthday, the kids made him cards, and found toys and wrapped them up in paper for him to open as presents. It was precious!

More precious Brody smiles! I could stare at his face all day. I often do. 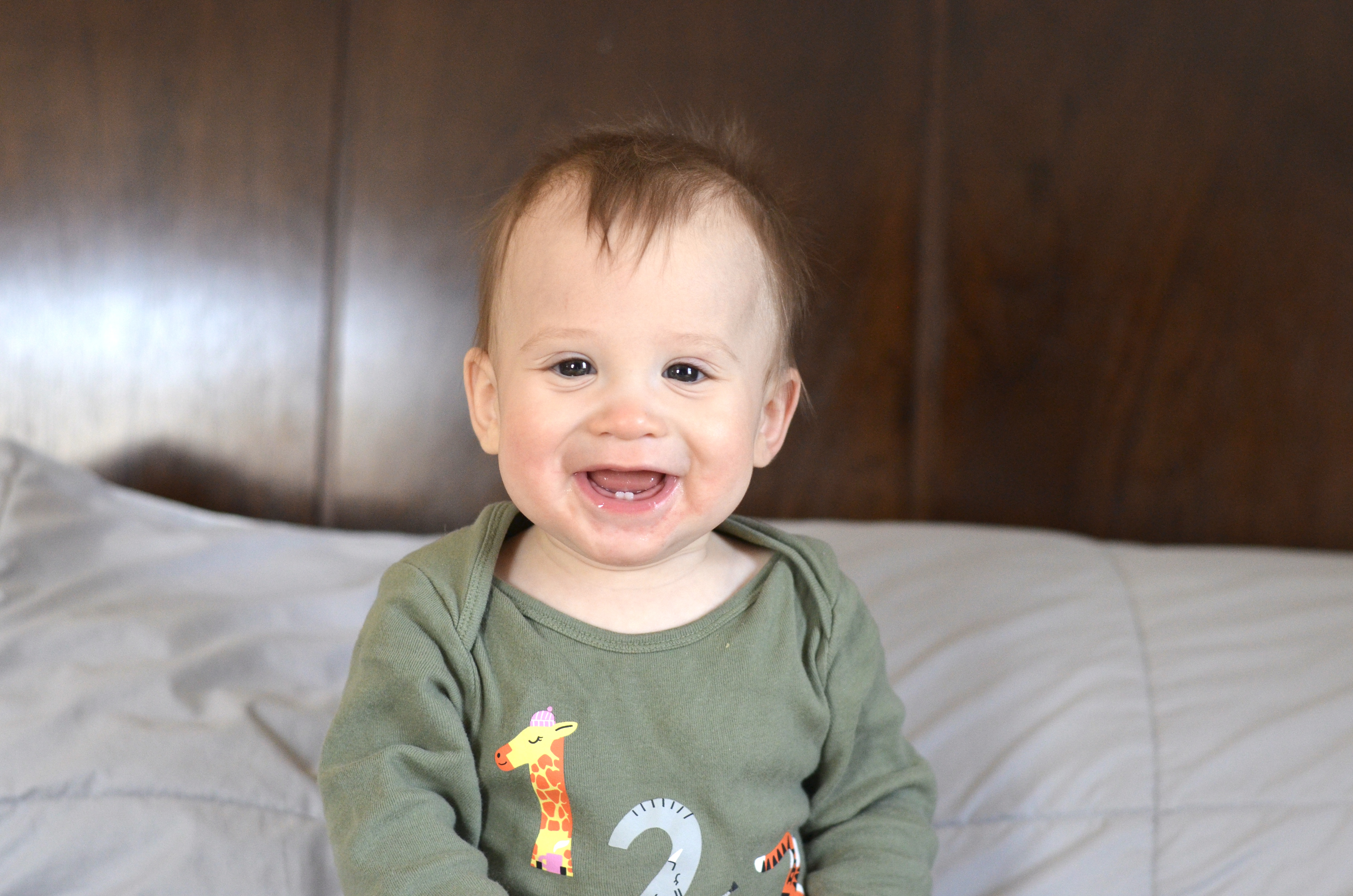 Here is our February 1 Second Everyday…enjoy! 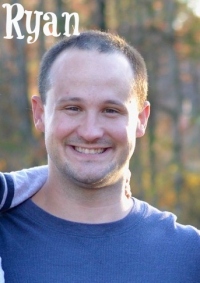 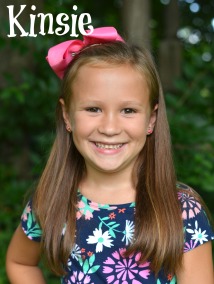 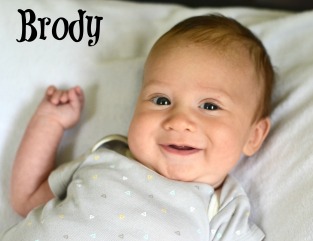